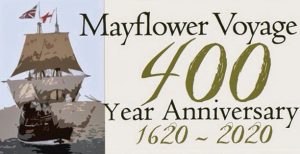 The San Diego Mayflower Colony in the State of California celebrated the 1620 Pilgrim’s “Voyage of Hope” and “First Harvest” celebrations in San Diego’s beautiful Balboa Park. The event was similar to our 2018 “Plimoth Colony-WEST” event which was held in association with the House of England. Please watch for updates in the coming years as we look to contiue this event. Below you can read about our 2018 event attended by more than 500 fellow San Diegans.

The San Diego Mayflower Colony held our first 400th anniversary event on Compact Day, November 11, 2018. It was called “Plimoth Plantation West—In Anticipation.” The event was held at the world famous Balboa Park House of International Relations and was co-hosted by the House of England. The International Cottages were built in 1935 for the California Pacific International Exposition. Our event was held in the central lawn area, near the House of England, from 11:00 a.m. to 4:00 p.m. An estimated 500 visitors passed through our exhibits and spoke with our Colony Member/enactors, all of whom were wearing 15th-16th period clothing.

Our tour was self guided and visitors were encouraged to explore the exhibits at your own pace. At stopping points, displays were presented to learn more about these interesting adventurers who bravely traveled here almost 400 years ago! Colony Members told about what it was like to be alone and on the edge of a continent new to them. Plimoth Plantation WEST–2018 was focused on outreach and education. There were multiple interactive displays showing aspects of what was happening two years before the famous voyage and the life and demographics of the travelers. In addition, roving enactor/Colony Members represented specific Mayflower passengers and told their personal stories to guests. We’d love to do this again, perhaps in the Fall of 2021, so watch for news updates.